My local library has re-opened after many months of COVID lockdown and the first book I borrowed was Sigrid Nunez’s National Book Award-winning The Friend. This was despite my resolution to avoid books about writers, but in my defence, I thought this was going to be a heart-warming story about a dog. I mean, look at the cover! 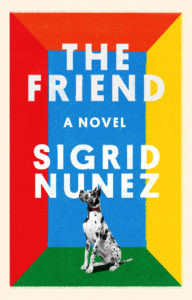 It’s actually a thoughtful meditation on death, grief, writing and literature, narrated by an unnamed author who inherits her friend’s Great Dane after the friend, who is also an author and a teacher of writing, commits suicide. The narrator is not a dog person and lives in a tiny New York apartment that forbids dogs. The plot, such as it is, concerns whether the grieving dog will come to accept and love his new owner, whether the narrator will get evicted from her rent-controlled apartment due to the illegal dog, and whether “anything bad will happen to the dog”.

Note: Nothing bad happens to the dog. Mostly, this is about loss and literature, with a lot of quotes from Important Literary Figures, including Virginia Woolf, Philip Roth, Flannery O’Connor, Baudelaire, Rilke and a bunch of French writers I’d never heard of. The narrator and her friend have many opinions about writing (that is, the sort of Serious Literary Writing done by people who live in New York, teach at Princeton and get fellowships to write in Berlin, much like Sigrid Nunez). Often this is about how things were much better in the Old Days. For example,

“The rise of self-publishing was a catastrophe, you said. It was the death of literature. Which meant the death of culture. And Garrison Keillor was right, you said: When everyone’s a writer, no one is.
[…]
None of this was as new as it might sound. ‘To write and have something published is less and less something special. Why not me, too? everyone asks.’
Wrote French critic Sainte-Beuve.
In 1839.”

The dead writer friend also had problems with modern readers treating books as objects to be “rated for consumer satisfaction”, required to affirm what the readers already felt and thought, with even his literature students appearing “never to judge a book on how well it fulfilled the author’s intentions but solely on whether it was the kind of book that they liked”. There are musings on the cancel culture promoted by his students:

“how self-righteous they’ve become, how intolerant they are of any weakness or flaw in a writer’s character. And I’m not talking about blatant racism or misogyny. I’m talking about any tiny sign of insensitivity or bias, any proof of psychological trouble, neurosis, narcissism, obsessiveness, bad habits—any eccentricity.
[…]
A novelist, like any good citizen, has to conform, and the idea that a person could write exactly what they wanted regardless of anyone else’s opinion was unthinkable to them. Of course literature can’t do its job in a culture like that.”

There’s an argument between two writers about the ethics of writing about a friend’s trauma, which I just happened to read during the Bad Art Friend kerfuffle. Another friend stops writing after discovering Buddhism and she explains why:

“You had to have ambition, serious ambition, and if you wanted to do really good work you had to be driven. You had to want to surpass what others had done. You had to believe that what you were doing was incredibly serious and important.[…] And even though writing isn’t supposed to be a competition, I could see that most of the time writers believed that it was.
Also, it seemed like money was in the front of everyone’s mind. I didn’t get that. Who on earth becomes a writer for the money?”

This book will probably most appeal to those who have some interest in the world of writing, but others may find it interesting for its exploration of grief and death. I found this book really engrossing and clever — and often, unexpectedly, amusing. There’s a good interview with the author here.